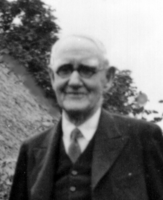 The Son of His Love — Papers on the Eternal Sonship

Studies in the Gospel of Mark

Studies in the Book of Ruth

Introductory
Part A. — Bethlehem forsaken for Moab
Part B. — Back to Bethlehem
Part C. — Ruth the Stranger in the Fields of Boaz
Part D. — Ruth the Suppliant at the Feet of Boaz
Part E. — Boaz becomes the Kinsman-Redeemer
Part F. — Joy for Naomi and Fame for Boaz
Part G. — A Typical Outline of Israel's Final Restoration
Part H. — Ruth as a Vessel of Divine Mercy

Address 1. — Fellowship — its Breach and its Recovery
Address 2. — The Spiritual Value of Divine Omniscience
Address 3. — The Lord's Words to the Last Three Churches in Asia
Address 4. — The Altar of Worship
Address 5. — The Sin of Achan
Address 6. — The World against Christ and the Christian

Christ and His Church

Third Series 10. The Lamp and the Light 20. Heavenly Savings Certificates 21. First the blade